Located in the north-west of the Auvergne region,in the department of Allier,the community of municipalities of the Land of Tronçais is in contact between the first slopes of the Central Massif and the Paris Basin. It stretches over a plateau of 280 m of medium altitude, low hilly, in the center of which extends the majestic forest of Tronçais. 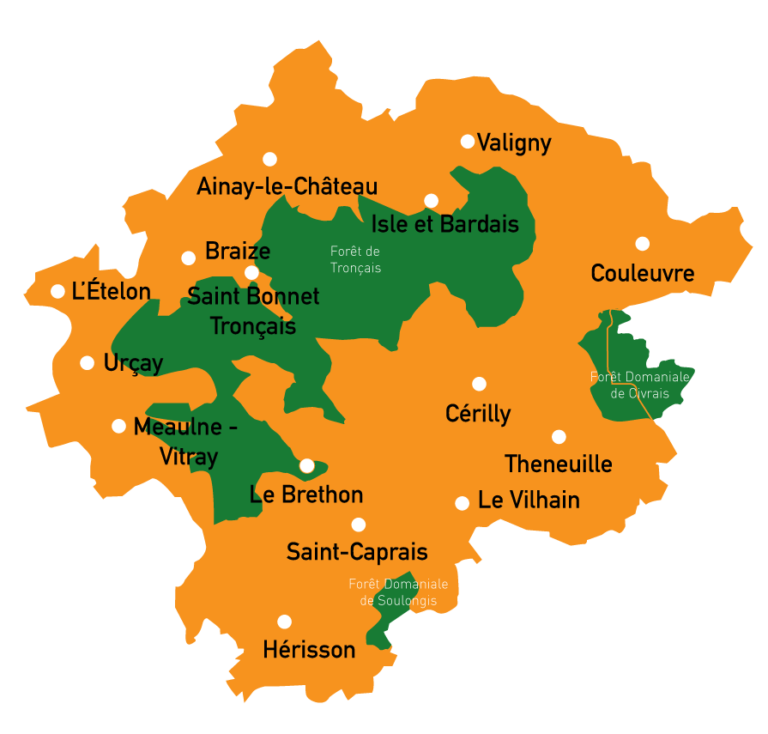 Ten municipalities have less than 450 inhabitants. At the intermediate level, 4 villages have between 600 and 800 inhabitants (Hérisson, Meaulne, Saint-Bonnet-Tronçais, Couleuvre). Finally, at the upper level, two service and equipment hubs, Cérilly (1,335 inhabitants) and Ainay-le-Château (1,020 inhabitants), 15 kilometres apart and separated by the Tronçais forest, account for half of the territory’s businesses.

The dominant agricultural activity is mainly focused on Charolais cattle, which occupies 60% of agricultural land, sheep farming and large crops (10% of the agricultural area used).

The economic fabric is characterized by a fabric of small businesses. Of 434 establishments, 93% employ less than 9 employees. Services account for three-quarters of jobs, industry 15%, trade 6.5% and construction 4.9%. The largest company “Berrywood”, which depends on the Beaulieu Group, moved to Meaulne in the late 1990s and now employs 118 people (parqueterie).